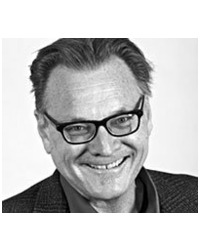 For the community of the New-Institutionalism Network, we cherish John Mohr particularly for leading the Network’s 2017 meeting, which was hosted at the Hebrew University of Jerusalem, with a keynote address titled “Logics, Fields and Machine Learning: Renewing Institutionalism in the Age of Big Data.”

It is with great sadness that I share the news that our colleague and friend, Professor John Mohr, passed away on Saturday, August 24, 2019, at 8:30pm, surrounded by family and loved ones. In late 2017, John was diagnosed with a fastmoving form of ALS. He remained an active and beloved colleague, researcher and mentor until shortly before his passing on Saturday.

Professor Mohr, an elected member of the prestigious Sociological Research Association, was widely recognized as one of the leading cultural sociologists of his generation. His scholarship has been foundational to Sociology’s renewed focus on culture – a transition now celebrated as the “cultural turn” -- through a research program that has sought to merge a focus on meaning-making practices and processes with quantitative methods, big data, and social networks. Professor Mohr developed this remarkable research program in an era before the internet and without the computational power that has now evolved to catch up with his intellectual foresight and creativity. Professor Mohr’s path-breaking research and innovative methods have also contributed to advances in disciplines across the social sciences and humanities, including the digital humanities and organizational and administrative/managerial sciences. Beginning in the late 1990s, Mohr emerged as one of the key leaders and architects of the University of California’s efforts to promote diversity and inclusion in the social and physical sciences.

At a recent American Sociological Association meeting, the most prominent scholars in the fields of culture, social organization, and social theory celebrated Mohr’s foundational contributions to the theory and method for measuring of meaning, and his advocacy for the use of “big data” text mining to illuminate meaning structures. Colleagues observed that Mohr’s research program bridges the fields of “qualitative and quantitative methods, mathematical and computational techniques, the formal and the hermeneutic, and the historical and the contemporary.” Professor Mohr’s ability to encourage and inspire the social science community emerged from his remarkable ability to develop empirical findings that illuminated longstanding questions of profound significance to social life, such as who do communities deem worthy of assistance, what are the institutional processes that shape the classificatory schemes used to give meaning to and justify these choices, and how do they give rise to further injustices?

Professor Mohr drew on these advances in becoming one of the key architects of the University of California’s response to the passage of Proposition 209, which banned affirmative action. Mohr’s interventions were crucial in UCSB’s emergence as a national leader in efforts to increase diversity in the physical and social sciences. Following his leadership of a newly formed academic senate committee at UCSB, the Outreach Advisory Group, Mohr was appointed Associate Dean of the Graduate Division.  In this capacity, he developed innovative ways to increase the diversity of UCSB’s graduate student population by establishing linkages between UCSB and the National Science Foundation (NSF)’s AGEP (Alliance for Graduate Education and the Professoriate) program, which sought to increase the number of African American, Latinx and Native American students earning PhDs and entering the professoriate. Mohr served for ten years as chair of the UC-wide AGEP alliance steering committee, helping to secure a $22 million grant, which was then the largest grant of its type ever given by the NSF. While serving on the NSF’s national steering committee for the AGEP, Mohr helped to develop a program he called UC-DIGSSS (the University of California Diversity Initiative for Graduate Study in the Social Sciences). The NSF institutionalized and expanded this approach in the following year, creating a program that now provides funding to 20 other universities across the country. Mohr continued to focus on institutional transformation throughout his career, developing a program to bring students of color from across the country to UCSB for a summer research experience, helping to lead the formal connections the UC system established with HBCU’s (Historically Black Colleges and Universities), and by offering his leadership and experience to such vaunted programs as the UC President’s Postdoctoral Scholarship Program, and the NSF ADVANCE and PAID grant programs which promotes gender diversity in the sciences. Throughout his career Professor Mohr also served as a mentor to new faculty from underrepresented communities. In recognition of his lifelong commitment to diversity, the Culture Section of the American Sociological Association created a fellowship in Mohr’s name to provide funding for students of color to attend the annual ASA meetings.

Colleagues praised Mohr as an intellectual pioneer and for his collaborative spirit, describing him as a curious and creative scholar who has consistently worked to expand the theoretical and methodological boundaries of cultural sociology. He was a Past-President of the Sociology of Culture Section; he remained active in the American Sociological Association and was serving as co-Chair of the Historical Sociology Section when he passed away. Mohr was also beloved as a creative and deeply engaged classroom instructor, an active and generous mentor to undergraduate, honors, and graduate students both in sociology and other disciplines. In 2018 he was awarded the Academic Senate’s coveted Distinguished Teaching Award.

Mohr was raised in southern California and attended the University of California, Irvine (B.A. and M.A.) and completed his Ph.D. in sociology at Yale University under the direction of Charles Perrow, Paul DiMaggio, Walter Powell, and Scott Boorman.

Mohr was a truly kind and deeply generous person who gave freely of his time as both an intellectual and a friend. As Roger Friedland, his friend, colleague, and collaborator observed, “John Mohr was, as he wrote in his journal that he wanted to be, a good man. He had a profound kindness about him, which you didn’t expect in somebody who loved the indifferent beauty of mathematical forms and their ability to represent our regularities. Power was not some abstraction for him. He felt the pain of oppression of the black students he mentored from southern colleges. As he experienced his own bodily powerlessness he reminded me that I ought to feel empathy for his dog who had to follow us on our walks. One day that dog, Persy, just sat down panting and wouldn’t move. John followed the dog after that. He was what he wanted to be: a good man. With ideas and a very big heart.”